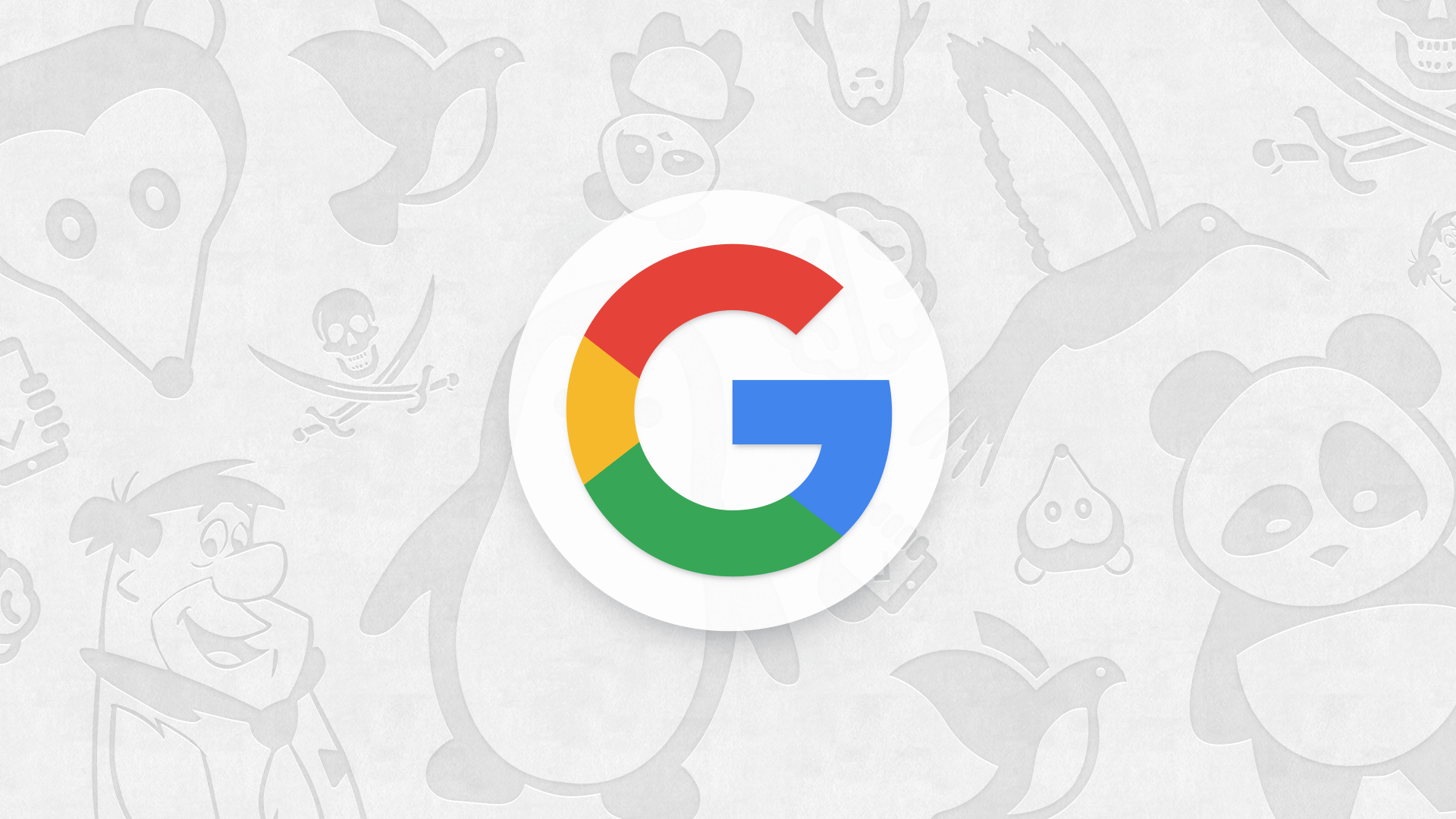 Google's algorithm is the program that works behind the search engines. It is responsible for filtering and delivering information on the result pages, according to each user's search and ranking factors.

It there is something the can frustrate digital marketing professionals, it's the changes in Google's algorithm. After all, a lot of work can be put into helping a website improve its rankings, until one day Google decide to tweak their algorithm causing the site's ranking to dramatically fall.

The algorithm is responsible for delivering what is most relevant to you. This is done based on over 200 different factors, and without it we would be shown pages at random making it more difficult to find what we want.

However, the algorithm isn't static. It has been constantly changing ever since Google started. In practice, it undergoes two types of updates:

This was Google's first major updates. It was what put SEO on the map, removing at least 50% of the site's listed. Florida was launched to combat low quality sites, which used bad practices, such as keyword stuffing.

Much later, the 2011 update affected almost 12% of the search results, penalising sites that had low quality content, especially those that had a lot of ads.

Since this update, there has been a much greater emphasis on the quality of a site's content.

Launched the following year, Penguin (which at the time was known as the Webspam Update) was responsible for stopping people from excessively optimising their site.

At the time, it impacted approximately 3.1% of English search results. The objective was to penalise sites that practiced keyword stuffing, among other black hat SEO schemes.

Like its predecessor, it went through a series of improvements and releases, until it reached version 4.0 (2016), when it was officially part of Google's algorithm and started to act in real time.

Unlike the previous updates, Hummingbird was not just a change to the algorithm but a complete overhaul of it.

As of 2013, the search engine results starting going beyond just the keywords, considering the semantic universe too. This includes the use of synonyms and the context in which terms are inserted, as well as the complex factors, such as the user's location and previous searches

Its main objective was to make the results more related to the user's search intent.

After encouraging developers to invest in security, this 2014 update announced that HTTPS was a ranking factor. This was done to incentives websites to become more secure.

This was done because sites that have an SSL certificate (and thus migrate to HTTPS) use encrypted information, preventing the data from being intercepted.

This update focused on mobile phones, and was known as Mobilegeddon - a reference to the film Armageddon, due to the impact that websites believed the update would cause. But, in practice, the impact was not so great.

Mobilegeddon started to prioritise sites that were better optimised for mobile crawlability.

In the same year, Google launched Rankbrain. This is a system that incorporates artificial intelligence into the algorithm, helping in the interpretation and presentation of search results.

According to Google, the systems has become one of the top three ranking factors, along with linking and content. Optimising the site for Rankbrain, however, is more difficult: it can only be done by exploring keywords that are part of the semantics.

The Fred update was launched in 2017 to identify sites with low quality content and many advertising banners.

Google trends analyst John Mueller said at the time that "if you are following good SEO practices, the only reason for penalising your site is the low quality of content".

Launched in August 2018, this core update had a major impact on the market as it caused changes in the positioning of several sites. But it soon became clear that the biggest impact on pages associated with Your Money, Your Life (YMYL).

These are pages that deal with health and finance, and therefore can directly impact people's lives. For this reason, the update was renamed Medical Update.

Based on the analysis of several people, this update to the Google algorithm was done to improve quality metrics - mainly EAT factors (which we discuss next). As a consequence, Google made it clear that the authors of such content must be clearly specified.

The YMYL sites that were impacted were the ones that had been written by people who had neither the profile nor the experience to write about such topics. For example, to talk about health, it is important to be a doctor, to present the different options, and have experience in that particular field.

The Medical Update in August 2018 also brought some complementary changes to the algorithm. The March 2019 update brought us EAT (which has nothing to do with food!).

This acronym stands for Expertise, Authoritativeness, and Trustworthiness, which has now become a fundamental guideline for ranking.

To have good results, you need to be an expert in your field. For this reason, the authors' experience counts a lot. It is better to have a doctor who specialising in diabetes to talk about the topic, rather than a person who has diabetes.

You need to show you are an authority on the subject. If your page is a community or discussion forum, the quality of the discussion is what drives authority. Spam or poorly made comments can be harmful.

It is necessary to show users that they can trust your website, which is an especially important requirement for e-commerce sites.

Grammatical and spelling errors are also considered reliability criteria. A misspelled word can hard your ranking as this is a signal of low quality. Also, don't use content that is machine translated; if you want translated content, as a human to do it.

On June 3, a new Google algorithm update was announced and it was the first time they had done so in advance of releasing a new update.

For a long time, the community had requested algorithm update announcements, so they could make changes before it came into effect. To discover the details of an algorithm updates usually requires several professionals to analyse sites that have undergone positive or negative changes.

With the announcement, the international community were being alerted to any changes in the metrics. 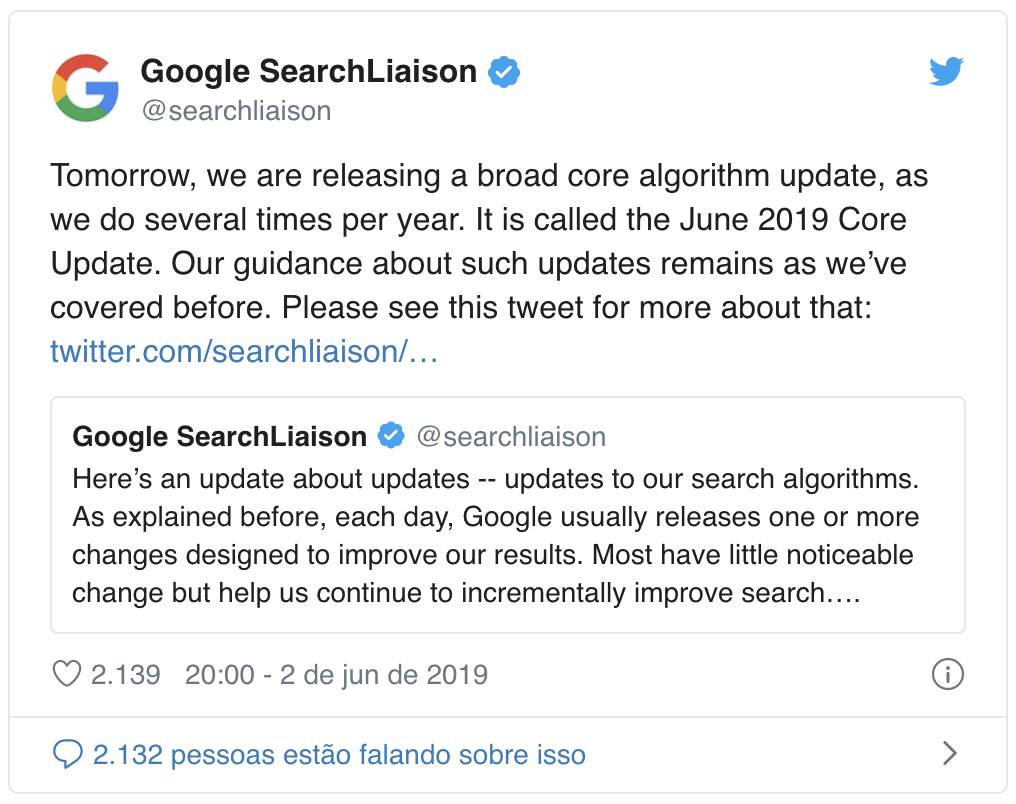 This update would mainly impact news sites, to ensure that the information is reliable. In the UK, for example, the Daily Mail reported that it lost 50% of its traffic from organic searches after the update.

The change made it clear that public confidence in the quality of content had become an even more relevant factor.

Among the many changes made to Google's algorithm, this was the quickest taking into account the time between one update and the next: it was just three days. The diversity update was launched on June 6, 2019.

This change was aimed at diversifying the results, preventing higher authority sites from being able to dominate the first page.

Before the end of 2019, Google brought yet another change in its algorithm, based on a natural language processing project with neural networks.

BERT, which stands for Bidirectional Encoder Representations from Transformers, is the name of this algorithm initially implemented for English language research.

This year started with two changes in January. The first one, which is related to the algorithm, was about featured snippets. Before, the results page presented the highlighted content and repeated it in its original position. After the change, there is no longer this repetition.

The second change is related to the appearance of the results, including the ads. The intention of this update was to reflect what users already see on mobile devices. But, this time the change doesn't seem to have lasted that long...

If you like this content you’re going to love everything else I do. I want to provide you with unbelievable value so you, too, can achieve all your business goals. Let me know what you think of this post and I'd be happy to help any of you guys who may be struggling with your own efforts to rank on the first page of Google. Also check me out on Instagram, YouTube, and Facebook. 😁